It’s been a while since I posted a story for the challenge and that’s because I’ve been away at Swanwick Writers’ Summer School and then on to a writer friend’s house in Nottingham. Watch out for a blog about Swanwick.

In the meantime here’s the latest challenger, Stephen Oak, with his response titled Closed for Business. 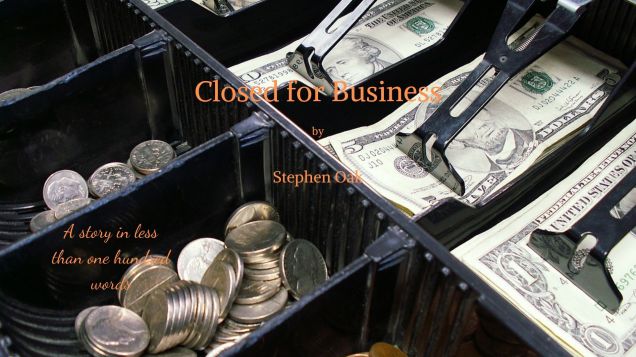 The busy chatter has faded. The jingling tills have fallen silent and the traders’ shouts no longer reverberate round the marketplace. Those who remain are intent on counting up the day’s takings, stuffing coins and banknotes into crinkled carrier bags. Stalls are dismantled. Van doors slam. Somewhere in the distance a balloon bursts and a child starts to cry.

No-one notices the young man strolling, almost invisible, across the square. No-one sees the bulge in his jacket nor the flash of the knife. No-one except the woman on the jewellery stall. And by then it’s too late.

Ooh… that one’s quite chilling, isn’t it?

The Art and Craft of Blogging

The latest news on WordPress.com and the WordPress community.